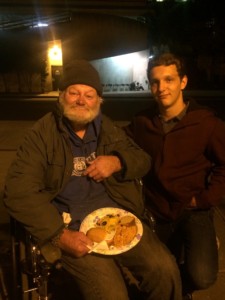 One night in June of 2001, a young Pastor named Tony Gapastione was having dinner with some of his church interns in Menlo Park. They noticed a few hungry folks near the train station and brought them pizza and offered to pray for them. This relationship continued throughout the summer, until the interns left for school. Tony realized there was a need, and with the help of some members from Peninsula Covenant Church, they continued to bring meals and assist those in need as best as they could.

In 2007, what was started by Tony Gapastione was entrusted to David Shearin, the current pastor. In 2012, Street Life Ministry (SLM) became an established 501(c)(3) non-profit organization. Today, due to the help of many people, SLM now serves over 30,000 meals a year, four nights a week, in Menlo Park and Redwood City. SLM offers additional assistance offering clothes, medical supplies and coordinates with other organizations to help find shelter and rehabilitation services to those that struggle in our community.